After all the posturing and ‘outrage’, Tories meekly do… exactly what Corbyn said 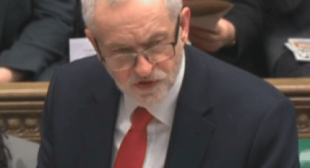 Much forced outrage and posturing – among the Tories and a few adventurist Labour backbenchers, as well as in the ‘MSM’ – has followed Jeremy Corbyn’s call for the government to behave in accordance with international law, to take evidence-based actions and to involve the OPCW (Organisation for the Prohibition of Chemical Weapons) in the investigation into the Salisbury nerve-agent attacks: