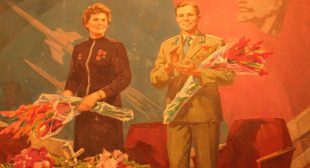 Russia and the United States have long been trying to one up each other, whether by way of weaponry, space travel or social policies. While Soviet Russia was, by most accounts, a pretty miserable place to live, the Soviets did beat the Americans at one thing: women in science and engineering.

Between 1962 and 1964, 40 percent of the chemistry PhD’s awarded in Soviet Russia went to women. At that same time in the United States, that number was a measly five percent. In 2006, that number was still lower than the Soviets’ from the ’60s—just 35 percent, according to the American Institute of Physics Research Center. In 2012, still only 37 percent of chemistry PhDs in America went to women.