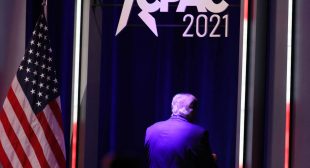 Trump and his post-election PAC, Save America, raised hundreds of millions of dollars imploring supporters to pony up and pay for his vividly doomed courtroom fights… except the fine print on the donation page stated that he can use that money however he wishes. If Trump is eating a burger right now, odds are someone in his base inadvertently paid for it back in December. Some 40 percent of those Save America donations went to the Republican National Convention to cover “expenses,” and the rest went right into his hip pocket.