The Right Is Planning More Armed Coup Attempts, According to the FBI 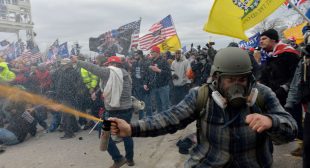 According to posts on far-right sites like TheDonald.win, energy appears to be coalescing around an armed nationwide assault on state capitals all across the country. “The specified locations include the U.S. Capitol and the Mall in Washington, the Utah Capitol in Salt Lake City, and locations in Pittsburgh and Columbus, Ohio,” reports The Washington Post. “Some events, including an ‘Armed March on All State Capitals,’ include localized events in all 50 states.”

Similar sabers are being rattled about further attacks on January 19, and an assault upon the inauguration itself on January 20. “The stuff I’ve heard in the last 72 hours — from members of Congress, law enforcement friends, gun shop owners, MAGA devotees — is absolutely chilling,” Politico’s chief political correspondent Tim Alberta tweeted on Sunday. “We need to brace for a wave of violence in this country. Not just over the next couple of weeks, but over the next couple of years.”