The Nazification of the Republican Party 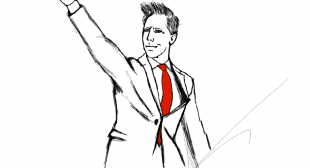 After World War II, the Nazis who helped Hitler rise to power and murder millions of people, including at least 6 million Jews, were put on trial to send a warning to the world. Not all of them faced a judicial process, but enough were not protected by their high status, official offices, or claims of “innocence” and “patriotism.” Power through violence was the only language they spoke—not justice, not freedom—and they were held accountable. More