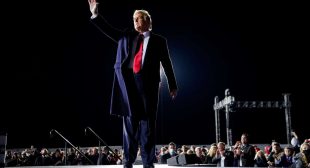 Speaking about the future of the Republican Party on Tuesday, Sen. Mitt Romney (R-Utah) said it’s very likely that former President Donald Trump would win the nomination for president if he decided to run again in 2024.

“I don’t know if he’ll run in 2024 or not, but if he does, I’m pretty sure he will win the nomination,” Romney said in an interview with The New York Times.