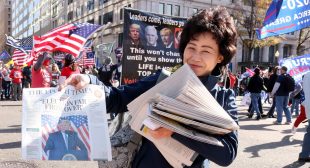 The New York Times recycled flimsy claims by a right-wing apocalyptic extremist to accuse China of “genocide,” in an op-ed by an American with 1/8th Uighur heritage who worked for Epoch Times, a far-right, pro-Trump outlet backed by cult Falun Gong. The New York Times published a factually challenged op-ed accusing China of committing “genocide” against its Uighur minority. The article sourced its spurious accusations to a right-wing operative who insists his research is part of a divine “mission” against […]