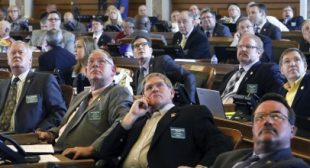 She’s also a member of the Mennonite Church USA, which in July voted to divest itself from American companies that profit off of Israel’s occupation of the Palestinian territories.

One month prior to that vote, Kansas’s legislature passed into law House Bill 2409, which seeks to discourage boycotts of the state of Israel by prohibiting state contracts with individuals who refuse to say they will not engage in such boycott activity.

Koontz, as a devoted member of her faith, she took the church’s guidance and decided to adopt her own boycott of Israel to protest its treatment of the Palestinians.

As part of her employment with the program, she was asked to sign a statement proclaiming that she does not boycott Israel. She stood by her personal faith and moral convictions, and refused to sign the statement. Because of this stand, she was denied payment as a contractor.