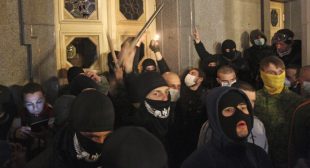 Irish MP Joe Higgins has rounded on Western nations for supporting âxenophobic, semi-fascistâ elements within the Kievâs new government. He accused the EU of using hardline groups such as the Right Sector to push a neoliberal agenda in Ukraine.

“Of course, the ordinary Ukrainian people detested the rotten Yanukovich dictatorship, but is that a justification for the EU to collaborate to the hilt with right-wing, semi-fascist, repulsive political forces?” said Higgins, referring to the ultranationalist Ukrainian groups Right Sector and Svoboda.