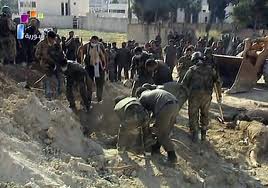 As the Syrian Army expelled rebel forces out of the capital of Damascus, soldiers discovered a mass grave of 20 corpses buried under rocks and other debris.

The mass grave was uncovered in the Yelda district of Damascus, which had been under rebel control for the past few days. The 20 corpses the army dug up were burnt and defaced, said China