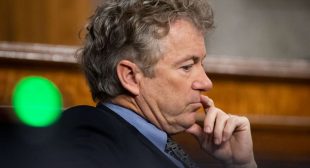 The ongoing civil war within the GOP had a deeply clarifying moment yesterday. If Tuesday’s events are the writing on the Republican wall, Donald Trump need not fear conviction in the Senate or loss of influence within the party. Even now — after losing the House, Senate and White House and being deeply complicit in a violent attack on the Capitol itself — the disgraced disaster zone of a former president still appears to be running through the raindrops without getting wet. And, of course, with help.

Rand Paul on Tuesday used a vote to dismiss the impeachment charges against Trump as a sieve, sorting the Trump loyalists from the heretics in broad daylight. For those in Trump’s corner, it was a moment of strength: Only five of 50 Republican Senators voted to continue with the trial, and 17 would be needed to ultimately convict. Paul was in full strut mode after the vote: “Forty-five votes means the impeachment trial is dead on arrival,” he crowed to reporters.