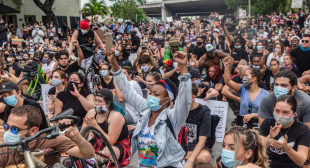 Civil rights and free speech advocates on Friday decried the advancement in the Florida Senate of a controversial bill that the ACLU says “aims to silence, criminalize, and penalize Floridians for exercising their First Amendment right to protest.”

The appropriations committee of the GOP-controlled Florida Senate voted Friday to approve House Bill 1 (pdf), which was first proposed by Republican Gov. Ron DeSantis last September in the wake of Black Lives Matter and other racial justice protests that followed the police killing of unarmed Black people including George Floyd in Minneapolis and Breonna Taylor in Louisville.