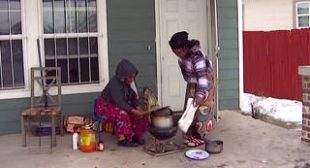 Millions of people in Texas were plunged into freezing cold and darkness as a major winter storm overwhelmed the stateâs power grid. More than 12 million Texans face water disruptions and have been ordered to boil tap water for safe consumption, and some parts of the state have no running water at all. The state is also running out of food as the storms disrupt key supply chains. Leading Republicans, including Texas Governor Greg Abbott, falsely blamed renewable energy sources for the stateâs blackouts, warning against a shift to more green energy, but the stateâs own energy department said the outages were primarily due to freezing at natural gas, coal and nuclear facilities. Despite the crisis, state leaders say they will not integrate Texasâs power grid with the rest of the country. âThe impact of this storm is more than just power outages and inconveniences,â says Texas Southern University professor Robert Bullard, who warns that the additional costs associated with the crisis will hurt Black and Brown communities most. âThatâs the inequity thatâs piled on top of the inequity.â