Chomsky: Republicans Are Willing to Destroy Democracy to Retake Power 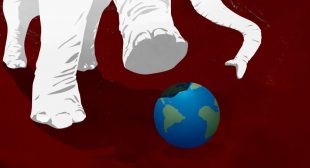 Today’s Republican Party is an extremist force that no longer qualifies as a mainstream political party and is surely not interested in participating in “normal” politics. In fact, today’s GOP is so wrapped around extreme and irrational beliefs that even Europe’s far-right parties and movements, including Marine Le Pen’s National Rally, seem conventional in comparison.