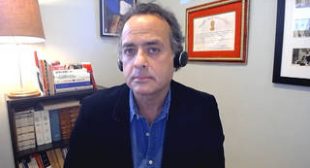 Beijing has accused the U.S. of perpetuating a Cold War mentality as President Joe Biden and senior administration officials shore up alliances in the Pacific region to counter Chinaâs growing influence and increasingly describe the country as a geopolitical threat. Vijay Prashad, director of Tricontinental: Institute for Social Research, says the âbellicoseâ tone out of Washington is not because the U.S. sees China as a military threat, but because China threatens U.S. dominance in the scientific, technological and diplomatic spheres. âItâs very chilling what the U.S. government is doing in ramping up this cold war,â says Prashad.