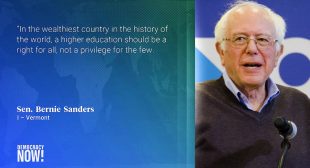 Senator Bernie Sanders and Congress member Pramila Jayapal have introduced legislation that would tax Wall Street to pay for higher education. The bill would make community college free to all and would eliminate tuition and fees at public four-year colleges for families earning up to $125,000 annually. The costs would be offset by a 0.5% tax on stock trades and smaller taxes on bonds and derivatives trades.

In a statement, Senator Sanders said, “In the wealthiest country in the history of the world, a higher education should be a right for all, not a privilege for the few. If we are going to have the kind of standard of living that the American people deserve, we need to have the best educated workforce in the world”