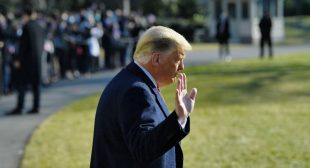 Making one final mockery of his 2016 campaign promise to “drain the swamp,” President Donald Trump early Wednesday quietly revoked his own executive order barring administration officials from lobbying the agencies for which they worked for five years after leaving government, freeing up a potential line of employment for outgoing White House staff.

“Great summary of Trump’s many farcical ‘drain the swamp’ betrayals,” said Norm Eisen, a senior fellow at the Brookings Institution. “His ethics EO was already garbage. Now he’s throwing even that out. The net result: his officials can now sell their services to foreign governments. That’s flooding the swamp, not draining it.”