Internet to give lawmaking powers to every Russian 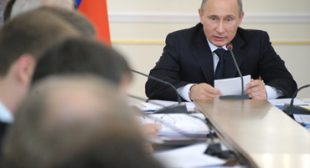 “In Soviet Russia, YOU make the law …”

Vladimir Putin has said that any Russian will be able to submit his or her own bills for parliamentary consideration after collecting 100,000 signatures in its support.

With this move, Russia is now second after Iceland to give its citizens the power to propose bills. Iceland has had drafted its new constitution by direc