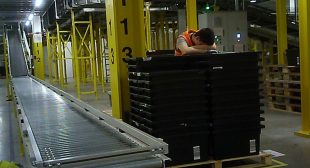 Amazon workers are so exhausted by long hours and relentless targets they are falling asleep on their feet, according to a new investigation. Employees reportedly had timed toilet breaks, a claim denied by the company.

Some were made to do compulsory overtime, meaning they were working a 55-hour week ahead of the Christmas period. Pictures taken by an undercover reporter captured workers asleep standing up as they reportedly had to process a parcel every 30 seconds.