All 535 members of Congress, and how much money they got from ISPs 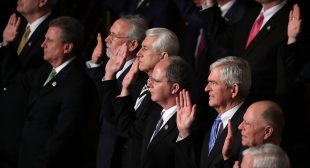 The FCC is about to give massive internet service providers the power to divide the internet. It is at risk of becoming unrecognizable. A vital global utility that has been a boon to creative and economic freedom for people around the world may be turned into a twisted land of tolls and corporate control.

The stakes are high. The internet now touches every town, every city, and every single one of us — whether we use it or not. Those who control the network control the future.

The FCC is the current venue for this fight, but Congress will eventually intervene. As telecom expert Susan Crawford argues, the FCC is “being outrageous” to force Congress’ involvement. And both net neutrality advocates and the telecom industry have asked for lawmakers to act. Advocates believe a law will make net neutrality more durable. But ISPs are betting they’ll be able to write the bill — because they’ve paid for the opportunity.