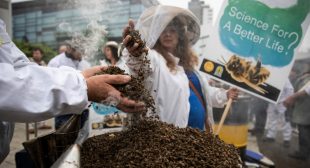 The European Union’s top court ruled Thursday in favor of the European Commission’s partial ban on three pesticides hazardous to bees, much to the chagrin of Bayer—the German pharmaceutical and biotech company that merged with agrochemical giant Monsanto in 2018.

Bayer attempted to overturn the ban and undermine the E.U.’s “precautionary principle” for the protection of environmental and human health, but the European Court of Justice dismissed the corporation’s appeal and backed a lower court’s 2018 decision to uphold restrictions on the use of some pesticides on certain crops. In 2013, the Commission banned the use of imidacloprid, clothianidin, and thiamethoxam—three bee-killing neonicotinoid pesticides—on maize, rapseed, and some cereals.