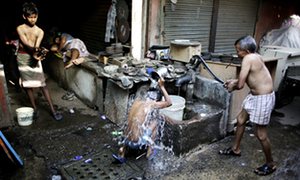 The world’s eight richest billionaires control the same wealth between them as the poorest half of the globe’s population, according to a charity warning of an ever-increasing and dangerous concentration of wealth.

In a report published to coincide with the start of the week-long World Economic Forum in Davos, Switzerland, Oxfam said it was “beyond grotesque” that a handful of rich men headed by the Microsoft founder Bill Gates are worth $426bn (£350bn), equivalent to the wealth of 3.6 billion people.

The development charity called for a new economic model to reverse an inequality trend that it said helped to explain Brexit and Donald Trump’s victory in the US presidential election.

Oxfam blamed rising inequality on aggressive wage restraint, tax dodging and the squeezing of producers by companies, adding that businesses were too focused on delivering ever-higher returns to wealthy owners and top executives.