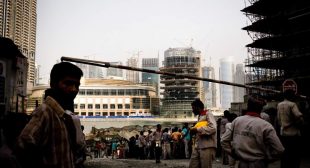 A new report released Thursday finds that economic inequality has soared in nearly every country around the world, with the United States’ income and wealth gaps widening to a particularly extreme degree compared to European and other countries.

The World Inequality Report, compiled by five economists including Thomas Piketty and Emmanuel Saez, found that the richest one percent of Americans held 39 percent of the nation’s wealth in 2016, compared with about 22 percent in 1980. Meanwhile, the average annual income for the bottom 50 percent of Americans has stayed at $16,000 per adult over the last four decades, adjusting for inflation.

Most of the increase in wealth at the top has been due to fast-rising incomes among the very richest Americans; while annual income for the one percent has shot up by 205 percent since 1980, the top .001 percent of Americans—only about 1,300 households—have seen their earnings go up by 636 percent.