Think our governments can no longer control capitalism? 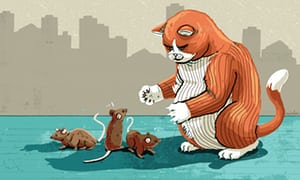 Seen in the simplest terms, the story of political economy over the past four decades is a class war between capital and labour, which capital has won hands down. The battlefield is littered with evidence of labour’s defeat: nugatory pay awards, precarious work, the collapse of collective bargaining, and cuts in public spending.

And to the victors have gone the spoils: higher profits and dividends; lower personal tax rates; a higher share of national income. Life for those at the top has carried on much as before, even as the average worker has experienced the worst decade for wage growth since the 19th century. Unsurprisingly, it sticks in the craw for those whose living standards are going down to see the 1% whooping it up. Nobody likes to have their nose rubbed in it.