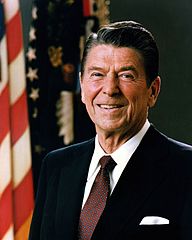 With the help of Alan Greenspan, Reagan pulled off one of the greatest frauds ever perpetrated against the American people.

It is so ironic that many people, today, still believe that Ronald Reagan came galloping up on a great white horse to sound the alarm that Social Security was in deep financial trouble. He then allegedly figured out a solution to the problem and rammed his legislative proposal through Congress in a three-month period. On April 20, 1983, the signing ceremony for the new legislation took place with great fanfare.

nstead of being a proud day for America, April 20, 1983, has become a day of shame. The Social Security Amendments of 1983 laid the foundation for 30-years of federal embezzlement of Social Security money in order to use the money to pay for wars, tax cuts and other government programs. The payroll tax hike of 1983 generated a total of $2.7 trillion in surplus Social Security revenue. This surplus revenue was supposed to be saved and invested in marketable U.S. Treasury bonds that would be held in the trust fund until the baby boomers began to retire in about 2010. But not one dime of that money went to Social Security.