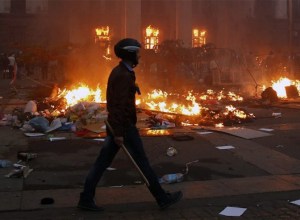 In what can only be described as a massacre, 38 anti-government activists were killed Friday after fascist-led forces set fire to Odessa’s Trade Unions House, which had been sheltering opponents of the US- and European-backed regime in Ukraine.

According to eye-witnesses, those who jumped from the burning building and survived were surrounded and beaten by thugs from the neo-Nazi Right Sector. Video footage shows bloodied and wounded survivors being attacked.