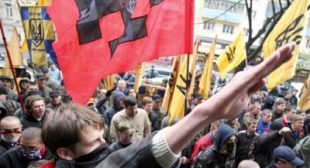 As the US, EU and Britain huff and puff in barrel loads of clichés: “red lines” are “crossed”, “sovereignty and territorial integrity” has been “violated”, they stand “shoulder to shoulder” with their Neo-Nazi counterparts in the interim puppet government.

They are “resolute” against “Russian aggression”, and will not “stand idly by”, sanity seems in short supply.

US Secretary of State, John Kerry representing a country which makes Genghis Khan look like a wimp when it comes to illegal invasions, still retains the prize for jaw dropper of the decade: “You just don’t, in the 21st century, behave in 19th century fashion by invading another country on completely trumped up pretext”, he pontificated on CBS’ “Face the Nation.”

On the thirteenth anniversary of the illegal invasion of Iraq and the total destruction of it’s “sovereignty and territorial integrity”, by America and Britain, Prime Minister David Cameron has scuttled off to Brussels for a meeting of European Union Ministers to agree on a “robust response” to Russia – which has fired not a shot, invaded no one and threatened nothing except to respond that if sanctions were imposed on Russia they might consider a trading response. Fair enough, surely?