U.S. Court of Appeals Joins the CIA’s Cover-Up of its Bay of Pigs Disaster 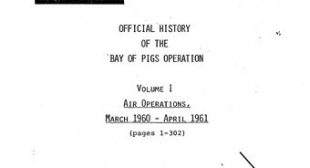 The U.S. Court of Appeals for the D.C. Circuit yesterday joined the CIA’s cover-up of its Bay of Pigs disaster in 1961 by ruling that a 30-year-old volume of the CIA’s draft “official history” could be withheld from the public under the “deliberative process” privilege, even though four of the five volumes have previously been released with no harm either to national security or any government deliberation.