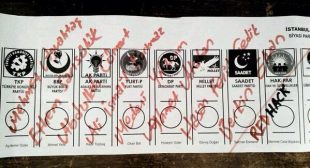 8 people have died and 27 wounded in clashes during Turkey’s local elections yesterday. Even though the Prime Minister, Recep Tayyip Erdogan, is not running in the election, the local elections are widely seen as a vote for or against Prime Minister Erdogan. Voters in Turkey were able to vote for local mayors, city councilors, and muhtars(non-partisan local officials). Erdogan has faced strong opposition since the start of the Gezi park protests that started last year in May. Once widely popular and seen as a moderate, attitudes are shifting in Turkey as Erdogan is now viewed by many as an authoritarian ruler especially after the violent crackdown on protests, internet censorship, and attacks on basic human rights.