Tourists in Israel can pretend to kill Palestinians for $115 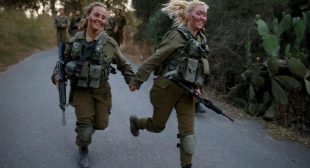 These part-propaganda, part-morbid fantasy “terror camps” provide tourists a chance to play the role of IDF soldiers in dramatic situations.

Apparently, half a dozen of fantasy terror camps have popped up throughout Israel and the West Bank, offering tourists from across the globe a chance to pretend-kill terrorists, who look suspiciously like Palestinian Arabs, only for $115 per person.