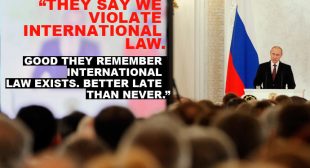 In perhaps the most pivotal address of the post-Soviet era, Russian President Vladimir Putin told the West to cut the bull on two decades of double standards and put the Cold War to rest. Here are the top 10 moments from his barn-burning address.

When Putin welcomed the West to the concept of international law:

When Putin said that, despite the stereotype, it’s the West who’s acted like a bull…or bear… in a china shop:

“They are constantly trying to drive us into a corner because we have an independent position, because we maintain it and because we tell it like it is and don’t engage in hypocrisy. But there is a limit to everything. And with Ukraine, our Western partners have crossed the line, playing the bear and acting irresponsibly and unprofessionally.”

When Putin told the West to get over its Cold War hang ups:

“Today, it is imperative to end this hysteria, to refute the rhetoric of the Cold War and to accept the obvious fact: Russia is an independent, active participant in international affairs. Like other countries, it has its own national interests that need to be taken into account and respected.”