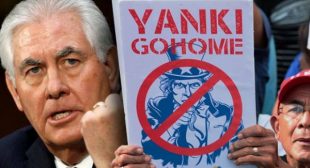 Washington has made one of its most foreboding threats so far against the Bolivarian Republic of Venezuela, as Secretary of State Rex Tillerson openly floated the possibility of stepping up “regime change” measures against the government of democratically-elected President Nicolas Maduro.

“Our approach to Venezuela has been to try to work through coalition partners, through the OAS as well as others who share our view of Venezuela’s future … Clearly what we want to see is for Venezuela to return to its constitution, return to its scheduled elections, and allow the people of Venezuela to have the voice in their government they deserve,” Tillerson told members of the press.