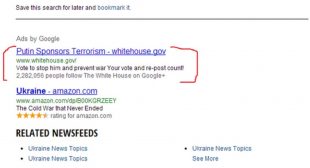 White House Purchases Google Key Words to Slam Putin Russian writer idaltae tweeted the following: “Whitehouse launches propaganda in twitter pic.twitter.com/S45vJokXN2 Because she didn’t say what search term she used to pull up that ad – and because we don’t live in Russia – it took some legwork to verify that this is real.

Specifically, we used Keyword Spy – a highly-regarded and widely-used resource in the SEO industry – to see if the White House had purchased keywords for Google using the domain name WhiteHouse.gov.

Indeed, we did find the ad using Keyword Spy. Read the rest at GlobalResearch.