The U.S. Media Yesterday Suffered its Most Humiliating Debacle in Ages: Now Refuses All Transparency Over What Happened 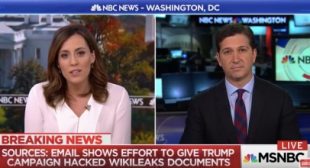 How did “multiple sources” all innocently feed the same false information to multiple media outlets? The refusal of CNN and MSNBC to say only compounds the damage they caused.