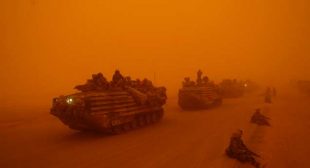 President Obama spoke in Brussels on Wednesday on the Russia-Ukraine situation. At one point, in seeking to shame Russia for its actions, Mr. Obama actually went so far as to try and legitimize America’s catastrophic actions in Iraq.

In fact, America ran roughshod over the international community to get that war going. If an invasion and ten-year occupation isn’t annexation, then nothing is. Companies like Halliburton/KBR absolutely grabbed Iraq’s resources, because their oil was supposed to “pay for the war,” and there were gas lines in Iraq for years after the invasion, because those companies sat on that oil like it was their own private piggy bank… which it was, as it turns out. And as for the state we left Iraq in, thousands upon thousands of people have been killed in the sectarian strife left in our wake. They aren’t making decisions about their future. They’re running for their lives.