Pentagon Furious After Turkey Leaks U.S. Base Locations In Syria 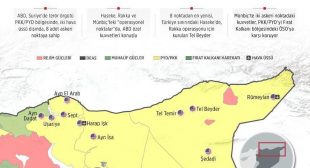 In a move that has angered the U.S. for obvious reason, Turkey’s state-run news agency Anadolu Agency has leaked the precise locations of U.S. bases in northern Syria. The move – which exposes the exact locations of American soldiers on the front lines in the war-torn nation – has sent the ongoing feud between the two NATO allies to new lows. As Bloomberg details, in reports published in both Turkish and English on Tuesday, Anadolu provided detailed information about 10 U.S. bases in northern Syria, including troop counts and a map of the U.S. force presence in the Turkish version.