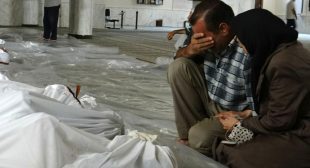 Armed gangs in Syria are conspiring to stage a chemical attack in the Damascus suburbs in order to later lay the blame on the Bashar Assadâs government, Syria’s UN Ambassador Bashar Jaafari has warned the Security Council.

“Competent Syrian authorities intercepted a wireless communication between two terrorists in the Jawbar area of the Damascus governorate,” Jaafari said in a letter addressed to Secretary General Ban Ki-moon and the Security Council. The letter was published on Tuesday on the UN website.

In that communication, the diplomat said, one “of the terrorists said that another terrorist named Abu Nadir was covertly distributing gas masks.”