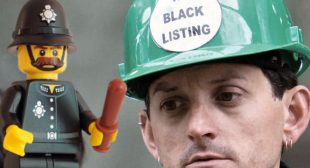 It’s been six years since investigative journalists published their expose accusing London’s Metropolitan Police of colluding with the UK’s construction cartel to blacklist workers who complained about unsafe working conditions, abusive bosses and wage-theft, as well as union organisers and other “troublemakers” — this week, the Met confirmed that its officers were an active part of the illegal blacklist.

The admission follows an internal investigation that concluded that the allegations were “on the balance of probabilities … proven.”

Scotland Yard concluded its investigation and reached this conclusion two years ago, but suppressed publication of its findings “due to its sensitivity.” The decision to keep the finding of wrongdoing was personally taken by the Police Commissioner Bernard Hogan-Howe. According to the police investigation, the police role in the blacklist was “overt and covert.”