How Cuba Beat the Pandemic: From Developing New Vaccines to Sending Doctors Overseas to Help Others 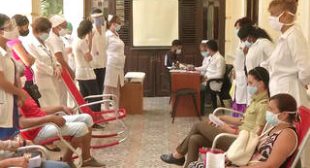 Since last year, approximately 440 Cubans have died from COVID-19, giving Cuba one of the lowest death rates per capita in the world. Cuba is also developing five COVID-19 vaccines, including two which have entered stage 3 trials. Cuba has heavily invested in its medical and pharmaceutical system for decades, in part because of the six-decade U.S. embargo that has made it harder for Cuba to import equipment and raw materials from other countries. That investment, coupled with the countryâs free, universal healthcare system, has helped Cuba keep the virus under control and quickly develop vaccines against it, says Dr. Rolando PÃ©rez RodrÃ­guez, the director of science and innovation at BioCubaFarma, which oversees Cubaâs medicine development. âWe have long experience with these kinds of technologies,â he says. We also speak with Reed Lindsay, journalist and founder of the independent, Cuba-focused media organization Belly of the Beast, who says U.S. sanctions on Cuba continue to cripple the country. âCuba is going through an unbelievable economic crisis, and the sanctions have been absolutely devastating,â says Lindsay.