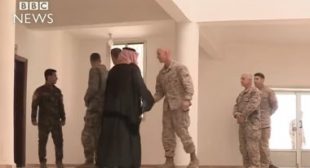 After free passage negotiations with the U.S. and its Kurdish proxy forces, ISIS is moving its fighters out of Raqqa city. When the Syrian government reached similar agreements the U.S. childishly criticized it. The U.S. coalition claims that it was “not involved in the discussions” that led to the Raqqa free passage agreement. A BBC News report shows that the opposite is true.

Over the last two years the U.S. and its Kurdish proxy force in Syria made several deals with the Islamic State. In 2016, for example, they negotiated a deal with Islamic State fighters to move from Manbij to the Turkish border to avoid further casualties in the fight about the city.

But when in August 2017 Hizbullah and the Lebanese and Syrian government negotiated a deal with some 300 besieged ISIS fighters and their families at the Lebanese-Syria border, the U.S. loudly protested. The U.S. military blocked and threatened to bomb the evacuation convoy over several days and the U.S. envoy McGurk ranted against it: