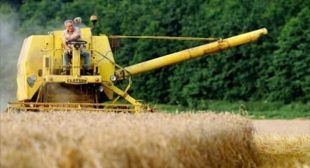 The world’s food supplies are at risk because farmland is becoming rapidly concentrated in the hands of wealthy elites and corporations, a study has found.

Small farmers, the UN says, grow 70% of the world’s food but a new analysis of government data suggests the land which they control is shrinking every year as mega-farms and plantations squeeze them onto less than 25% of the world’s available farmland, says international land-use group Grain. These mega-farms are less productive in terms of amount of food they produce per area of land, the report argues.