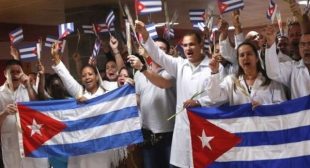 Argentina’s government confirmed Sunday night that a contingent of 202 Cuban doctors will arrive in the South American nation to help local health professionals with the spread of the COVID-19 pandemic.

“The idea is for them to contribute and join medical resources. They won’t be at the front line,” Argentina’s Minister of Health Gines Gonzalez said, adding that the Cuban specialists won’t be making important decisions but will be treating patients and helping where needed.

The minister explained that the objective is to preserve the most experienced professionals from fronting high exposure to infected patients. “Currently there are between 650,000 and 670,000 doctors. 70 percent come from the university, that’s why you have to take great care of them,” he added.

The need to explain the measure comes as right-wing opposition groups have criticized the decision, despite the need to join forces against the global pandemic. As of Monday, there are 2,941 confirmed cases and over 135 deaths.

The Cuban medical brigade is expected to arrive in May when the infection rate will likely hit its peak in Argentina.