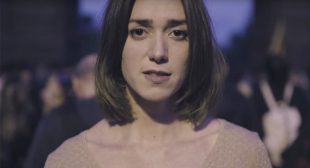 A new video promoting Catalonian democracy looks suspiciously similar to a production made about the 2014 Maidan protests in Ukraine – and many online are not impressed.

‘Help Catalonia. Save Europe’ is a new video published on the YouTube account of Catalonian cultural organization, Omnium Cultural.

It starts with a woman standing on an out-of-focus street, saying, “This is Barcelona.” She points to people on the street and says, “We, the Catalans are taking back the streets to protest peacefully.”

The 2014 Ukrainian video also begins with a woman standing on an out-of-focus street, saying, “I am Ukrainian,” before going on to say, “I want you to know why thousands of people in my country are on the streets.”

Both videos contain footage of police brutality, and both call on the audience to help them by sharing the video to defend democracy, or European values.

At the end of both videos, viewers are warned to support the cause, “before it’s too late.”

The video was shared on social media and raised some questions, criticisms and debate.