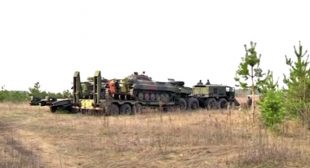 Activists in eastern Ukraine in the Donetsk and Lugansk regions are blocking columns of heavy military equipment heading from Kiev to the border with Russia.

Late Thursday activists from the Donbass people’s militia blocked the way of columns with about 20 trucks carrying heavy military equipment near Donetsk heading to the Russian border, a local activist and former officer of the Ukrainian Emergencies Ministry told RT.

“At about 5pm [1500 GMT], local activists called me,” said Sergey Rzhavsky. “They reported that a column [with military equipment] was situated near the town of Volovaha from the side of the Valeryanovka settlement. We, the Donbass People’s Self-Defense Units of Pavel Gubarev [the local governor, currently arrested in Kiev] promptly headed there. We saw about 20 heavy trucks there with some carrying airborne combat vehicles.”