In Silicon Valley, the homeless illustrate a growing divide 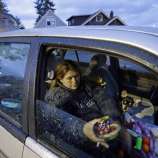 MOUNTAIN VIEW, Calif. (AP) – In the same affluent, suburban city where Google built its headquarters, Tes Saldana lives in a crowded but tidy camper she parks on the street.

She concedes it’s “not a very nice living situation,” but it also is not unusual. Until authorities told them to move, more than a dozen other RVs filled with people who can’t afford rent joined Saldana on a tree-lined street in Mountain View, parked between a Target and a luxury apartment complex.
Homeless advocates and city officials say it’s outrageous that in the shadow of a booming tech economy – where young millionaires dine on $15 wood-grilled avocado and think nothing of paying $1,000 for an iPhone X – thousands of families can’t afford a home.