There may be a second massive ocean deep beneath the surface 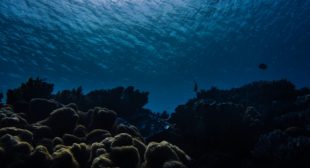 There may be a second and massive ocean made up of molten minerals under the surface, recent discoveries show.

Deep within the Earth, staggering pressures mix with high temperatures to compact regular materials into exotic minerals. Under these extreme conditions, one familiar mineral—a blend of magnesium, iron and sand that geologists call olivine (and most people would know by its gemstone form, peridot)—is transformed into a material called ringwoodite.

This material is produced in Earth’s so-called “transition zone,” from around 255 to 416 miles depth, where the outer mantle turns to the inner mantle. While ringwoodite has been found before, in meteorites crashed to Earth, ringwoodite of terrestrial origin is a rare find.