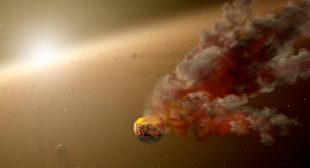 Early last year a far-off star captured the imagination of the scientific community thanks to its incredibly bizarre behavior. The star, which is officially named KIC 8462852 but is better known as “Tabby’s Star,” frequently goes dim at unpredictable intervals, and researchers were initially at a loss as to how to explain it. Later research suggested a cloud of dust was the culprit, but earlier this month the star’s light began to wane once more, and this time it got darker than ever.

Now, researchers are forced to reckon with a new data point that could put a dent in any previously proposed explanations of the brightness shifts. It seems the star just won’t let itself be explained away.