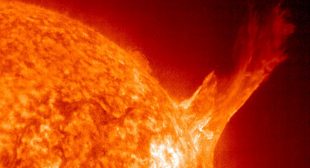 Citizens of Earth had no idea how close the planet was to getting slammed with a devastating solar flare back in July 2012, but scientists claim we only missed the damaging event by nine days.

As noted by Reuters, scientists found that a series of coronal mass ejections – powerful eruptions on the sun’s surface that send waves of magnetized plasma through the solar system – occurred last year sometime between July 22 and 23. The blasts traveled through Earth’ orbit, but narrowly missed colliding with the planet.

According to a new report published in the Nature Communications journal on Tuesday, if the solar eruptions occurred just nine days earlier, they would have likely hit Earth and caused a great deal of damage to the planet’s magnetic field. Fortunately for us, the Earth was on the other side of the sun by that point.

Scientists believe the blast would have equaled the might of the most powerful magnetic storm ever recorded: the Carrington event of 1859, which took down telegraph services around the world.

“Had it hit Earth, it probably would have been like the big one in 1859, but the effect today, with our modern technologies, would have been tremendous,” Janet Luhmann, part of the STEREO (Solar Terrestrial Observatory) team a University of California Berkley researcher, said to Reuters.