The DNC Is Debt Ridden, Unpopular and Failing 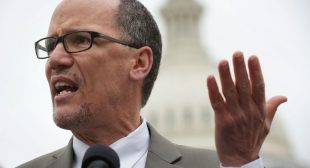 DNC Chair Tom Perez recently sent out a fundraising email to supporters claiming, “I know garbage when I see it,” citing that he once worked on a dump truck. It’s ironic that he referred to the GOP health care bill as a “flaming dumpster fire” because he has been presiding over the disaster that is the Democratic National Committee. The organization reported that May 2017 was its worst fundraising month since the Iraq War in 2003, and April 2017 was its worst fundraising month since 2009. In May, the DNC also reported that it has $1.9 million in debt. Despite the fact that former Secretary of Labor Tom Perez was recruited by Barack Obama to appease the party’s donors, lobbyists and PACs, even they have refused to prop up the failing brand.