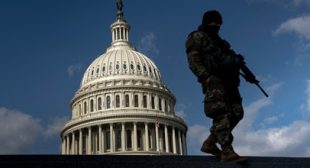 To Hawkeye, the implications were apparent: Calling someone an insurgent or terrorist implied permission to marginalize him, strip him of his rights, detain him, hunt him, and kill him. He’d done this himself to people tagged with those labels overseas. “When I think terrorist,” he told me, “I think, take your ass to Gitmo, and that’s where you belong.”

Now he was finding himself on the other end of it. “America has always had a boogeyman,” he said. “At one point it was Germany, then it became Korea, then it became Russia, and then all of a sudden it’s Middle Easterners.” As he sensed the government’s sights turning his way, he was stripping his social media accounts of political references and being careful about what he said. “I’m posting nothing but cat videos and family reunions. I’m trying to mitigate as much as possible.”